Treasure Time at Southworth Library in Dartmouth, MA on August 10. 2016 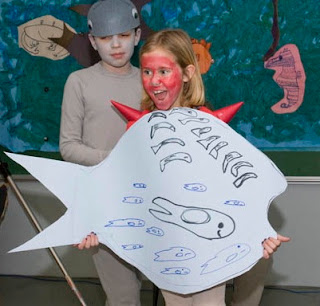 Treasure Time Showcase, celebrating Summer Reading in Dartmouth, MA. Sing and dance to original songs and games from favorite books. Participate in imrov acting to a scary shark story, and learn about how to play Quidditch  with Harry Potter. Join in the fun @ 2PM on Wednesday August 10.

Posted by Mrs. Treasure at 9:51 PM No comments: 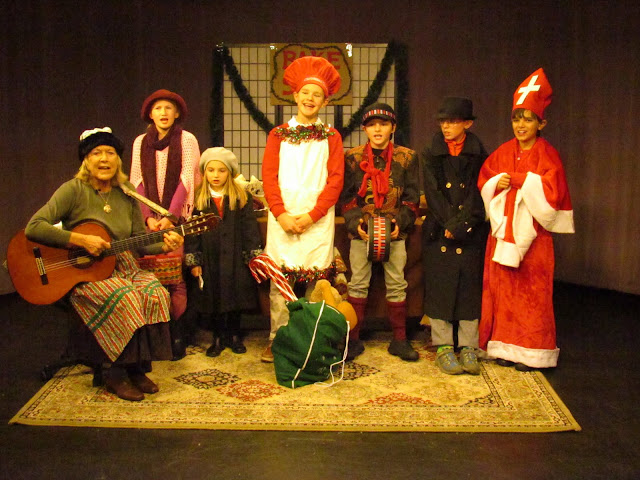 Six children worked very hard during the month of November to produce a Treasure Time Christmas program, with Lee Drescher at FCTV. The show will run for the month of December and maybe into January, so watch for it on channel13.
The name of the program is A Baker’s Dozen, and it is based on a folk tale from Albany, New York, about a baker who never gave any more or less to his customers than the exact amount. That is, until one day a mysterious lady in black appeared and expected to receive thirteen Saint Nicholas cookies instead of twelve. Because the baker would not give any more, business declined, and he grew poor. Just before the following Christmas, Saint Nicholas appeared in a dream and talked about being generous. The same mysterious lady came back, and this time the baker conceded and gave her an extra cookie to make thirteen. Thus the term “a baker’s dozen” was coined.
After Mrs. Treasure reads the story, a skit is performed by kids ranging in age from six to thirteen. The baker is Nicholas Dreyer. His sister, Caroline, has the part of Mrs. Miller as well as the Mysterious Lady in Black. Emery O’Keefe from Bourne also has two parts, one as Hans and the other as Tony, the band leader. Kelsey Crowley is Greta, one of the children who comes and asks for cookies after school. Two boys from the FCTV youth class also have parts in the skit. Nate O’Brien is St. Nicholas and Mattie O’Brien is Mr. Kraut. Manning the camera were two volunteers, Gunar Kinat and Elliot Pribillla, a youth producer, while Kevin Lynch assumed the role of head producer. The show concludes with thirteen verses of Twelve Days of Christmas, with the thirteenth verse being “thirteen bakers baking.”

Ms. Drescher founded Treasure Time Productions, which is a non profit organization promoting literacy through the arts. Currently she serves eight Head Start Centers in Boston. She taught afterschool drama for seven years at KC Coombs School in Mashpee, and has also done projects with Buzzards Play Productions in Wareham.

Posted by Mrs. Treasure at 9:36 AM No comments:

All children will have a chance to be onstage tomorrow, Saturday July 20, at Arts Alive, in Peg Noonan Park, in the Library Tent from 11:20AM to 12:20PM. Mrs. Treasure will be read stories, play games and sing guitar songs while kids join in, and there will be dancing with scarves. The theme is sunflowers, seeds and flowers. Children ages 2-8 are welcome. We also might do some farm animal songs.
(arts Alive 2014) 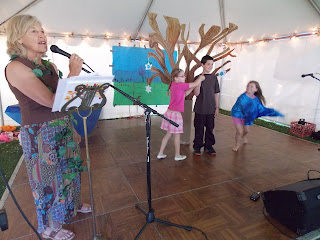 Posted by Mrs. Treasure at 7:03 PM No comments:

Posted by Mrs. Treasure at 6:13 PM No comments:

Email ThisBlogThis!Share to TwitterShare to FacebookShare to Pinterest
A busy Summer is shaping up for the Treasure Time Story Book Theatre. On June 21 at 11AM Mrs. Treasure will be at Arts Alive in a tent at Peg Noonan Park in Falmouth. Instead of having a rehearsed group perform, Mrs. Treasure will be available to read stories, sing songs and do some dramatic skits with whoever shows up in the audience. This can be an opportunity for kids to be on stage and perform a simple song or skit, and for younger children to hear stories and songs from older kids. Do come and join us! Here's a picture from last year. 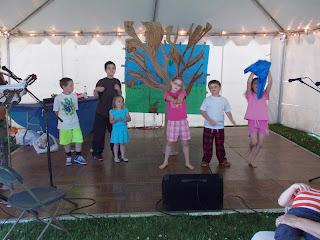 Posted by Mrs. Treasure at 6:08 PM No comments:

Check out our new You Tube Channel. https://www.youtube.com/channel/UCSpKSlCOtEsED6ckdoCrdrA 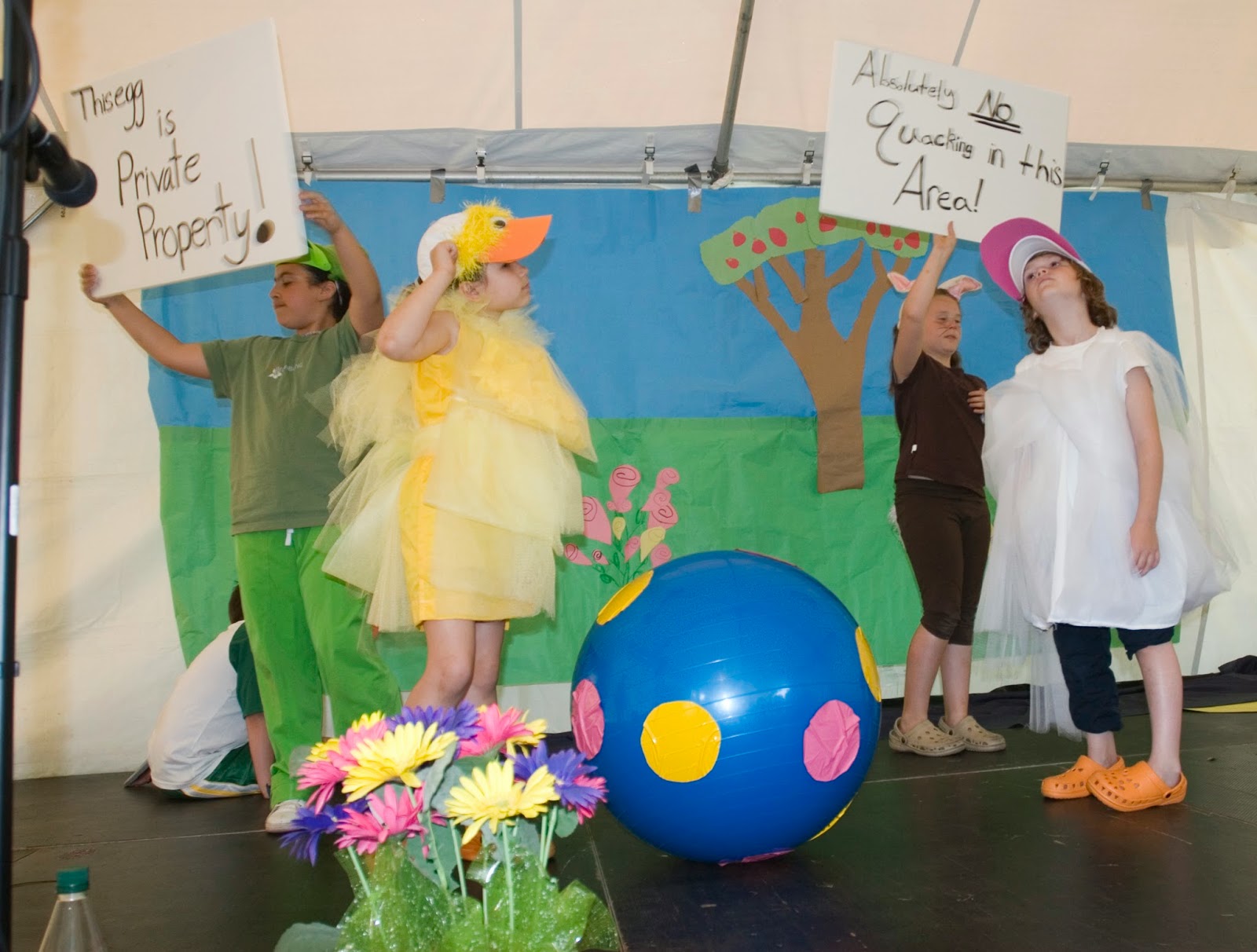 Posted by Mrs. Treasure at 7:54 AM No comments:

The Elves Are Still Busy

Since October, the St. Margaret’s Players of St. Margaret’s School in Buzzards Bay have been working on an original version of the the beloved folk tale, The Elves and the Shoemaker. Due to overscheduling before Christmas, the production date has been moved to the upcoming weekend of January 10 &11, 2015. Rehearsals are continuing at the school during vacation, with four elves and all characters working hard to perfect their performance.
Janice Rodgers of Buzzards Play Productions and Lee Drescher of the Treasure Time Story Book Theatre are working with sixteen children who range in age from eight to twelve. They will perform a children’s musical  which will last about an hour, including the intermission. With the encouragement of Rodgers, this is Drescher’s first attempt to write a children’s show of longer duration than the short skits  which she usually creates in conjunction with her live story hour. 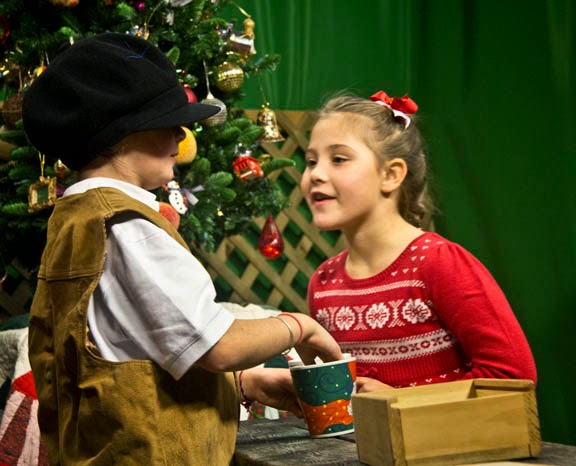 The first performance will take place at St, Margaret’s School on Saturday January 10 at 2PM, and the second performance will be at Buzzards Play Productions In Wareham, on the Cranberry Highway on Sunday January 11 at 2PM. The play is suitable for children ages three and up, and all are invited to attend. Admission is $5.00.
Posted by Mrs. Treasure at 8:05 AM No comments: